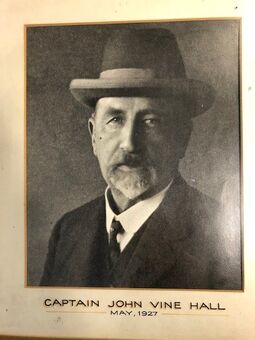 Gibson Minto & Aiton Marine and Cargo Surveyors has a long prolific history and was first established by Captain John Vine Hall (pictured left)  in 1883.
Captain John Vine Hall was born 9th January 1845 at Maidstone, Kent. At the age of 14 he responded to the call of the sea  joining the "Caduceus" which was a wooden full-rigged ship of 1000 tonnes. In 1867 at 22 after completing his apprenticeship he joined NZ and Australian Mail Co.,  where he later became Master of the vessel trading between NZ and Australia carrying passengers and Her Majesty English mail.
He later joined the Pacific S.N. company's service in 1870 where he was Master  of "Cordillerat" which was a mail and passenger ship transiting from United Kingdom to east coast of South America.  In 1877 he was appointed to command the second Orient steamer to leave London at the inauguration of the Orient Line.
After 25 years service, in 1883 Captain John Vine Hall left the sea and started a marine survey business. The company representing both  as agents and surveyors for a number of Classification Societies. 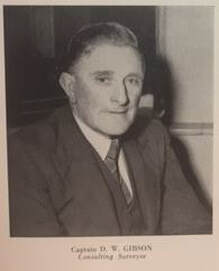 The superior experience and knowledge of Captain John Vine Hall soon built the business's reputation into one known for comprehensive marine expertise.
Joining forces with a number of experienced ex Masters who became marine surveyors the business continued its successful path. Strong partnerships also continued. In the early 1900s Captain D.W Gibson ( pictured right) joined the firm where it was known as Vine Hall Howell and Gibson. With the passing of Captain John Vine Hall in 1950 Captain T. Minto joined the ranks of the business where it later became Gibson and Minto Pty Ltd. 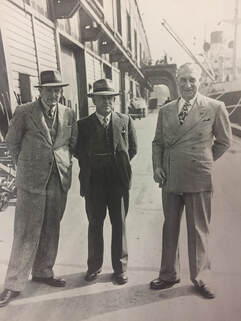 ​Over the years both Gibson and Minto continued the success of the business establishing and building connections both Nationally and Internationally between vessel owners, major shipping lines, P&I Clubs, Classification Society, stevedoring companies and waterside workers (Picture left is Captain Gibson with Reginald Reed - Director and Marine Superintendent and Mr. James A Patrick - Director of Australian Stevedore company) .

In 1954, a young Neil Aiton and Alexander "Munro" Kirkland both aged 16, first met at The Royal College of Science and Technology, Glasgow. On completion of their studies both joined the Blue Funnel Line in 1955 as midshipmen, Neil to Australia on the “Moorhen” and Munro to the far east on the “McCartney.” Some years later Neil & Munro sailed together on the training ship “Doomed”.
In the 1960s Captain Neil Aiton became partner and the business continued to operate as Gibson Minto & Aiton Marine and Cargo Surveyors Pty Ltd.
With the retirement of Captain Minto in 1973, Captain Munro Kirkland was recruited by his good mate Neil, where he became partner. In 1978 the firm was appointed by the then Waterside Workers Federation (WWF) to examine the access arrangements on cargo vessels. The business later carried out design work which became the basis of Australian Marine Orders Part 32 on access arrangements associated with container/cargo vessels.

Today the firm continues evolve and operates as we know it today as Gibson Minto & Aiton Marine and Cargo Surveyors Pty Ltd - the oldest Marine surveying company in Australia!
Interesting Fact:
In 2017, Gibson Minto & Aiton Pty Ltd were winners of the AIMS Award for Excellence - President’s Rising Star. The firm was also nominated for AIMS Award for Excellence – for Marine Survey Practise of the year and the Student Achievement Award.